July sunshine poured through the living room windows of Lynn and John O’Neil’s newly remodeled residence on the shores of Lake Minnetonka, covering friends and family inside in a warm blanket of light. Past Danish and Chinese exchange students and their spouses made the trip to Wayzata to celebrate the finished project and a job well done, as did relatives from New York and North Dakota, the couple’s grown children, their design team, and more. Laughs and catch-up conversations carried throughout the main floor, while the piano’s joyful melodies swirled above their heads. The house was buzzing, the downstairs entertainment area was doing its job, and overhearing exclamations of praise from those touring the home was a regular (and deserved) occurrence.

It wasn’t until everyone piled into the kitchen for a meal, though, that Lynn’s hopes for the new space were fully realized. “It really represented what our vision and dream was for the home—to have a space where we can all gather,” she recalls.

But only a few years prior to this celebration, the homeowners had a much smaller New England-style home with poor traffic flow and limited natural light. In fact, it was originally purchased to be their summer cabin, but the O’Neils, who travel often and tend to homes on both coasts, had a feeling this specific property was meant for more—specifically, to become their (and Lynn’s parents’) permanent residence. “We really believe in multigenerational living and the positive influences it can have on our family, my parents, us, our extended family, and our children,” Lynn says. “We wanted to expand the home to make it easier for a large family to live in.”

The first order of business was finding the perfect person, someone the homeowners already knew and respected, to lead the charge on a large renovation that would maintain the home’s integrity yet update its function and feel. The task would prove to be no easy feat, but it was one that Bill Worms, owner of BayCliff Homes, readily accepted.

“Originally, the idea was to demo the house and start over,” says Worms, who once played on Minnetonka High School’s football team with John. “With my guidance, they understood the value of what was already there and how we could make the home spectacular.”

Worms called on interior designer Jeanne Anselmo of JJ Designs to keep his word, and together, they arranged spaces to fit Lynn and John’s ideas of a functioning home—ones that offered privacy for Lynn’s parents, but also unmatched hospitality for future exchange students and visiting business colleagues. The solution included two private entries, strategic segmenting of personal and unified spaces, and a guest wing with four suites, a conference room, and a cottage-style coffee bar that overlooks the front of the property. 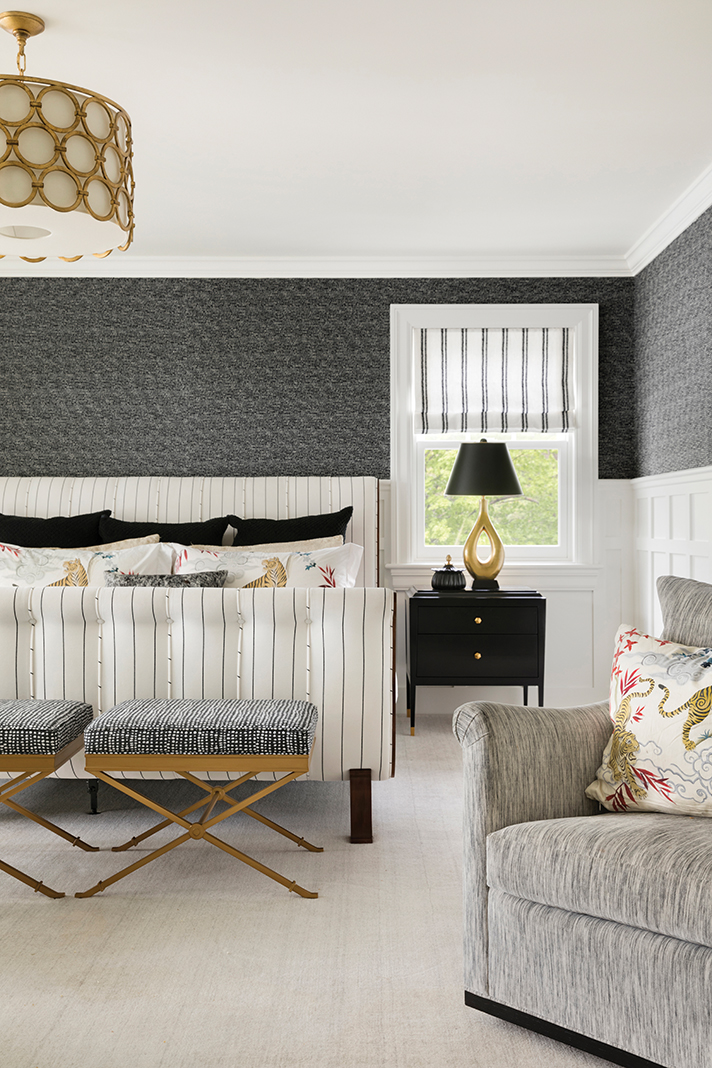 “During the year, it operates like a small bed-and-breakfast because we have a lot of friends and family from all over the world that come and stay for a week or two,” Lynn says. “The home is built to make people really feel welcome. They aren’t worried about putting their shoes up on the ottoman or sitting in a chair, and there are lots of little spots where people can relax and unwind, hang out and do a puzzle, have a cup of tea, look out at the lake, or reconnect with each other.” (She isn’t kidding—the finished home has eight beds, 12 baths, six garage stalls, and 16,000-plus total square feet to encompass all of the above.)

Designing all this square footage ended up requiring more than just Worms and Anselmo’s expertise. After the project grew and deadlines tightened more than a year in, Anselmo recruited Karen Soojian of KSID Studio to work with her on the remaining interior spaces, where they would focus their attention on the home’s feel more than its minute design details. “[Lynn and John] were never specific to color or even style,” Anselmo explains. “They never said, ‘We want blue’ or ‘We want cottage.’ It was the feel that was so important for them. We tried to keep it updated, but the word ‘classic’ resonates with me in everything we did.”

And for anyone who steps into the O’Neils’ now-timeless American lake home, the words “global,” “worldly,” and “cultured” will likely strike a chord as well. You’ll discover African elements and European touches here and there, while Japanese imagery and Asian-influenced décor are both abundant and meaningful. (Lynn was once an exchange student in Japan, and it’s also where she and John met out of college.)

For example, a kimono painting in the master bathroom complements the black clawfoot tub, an armoire in Lynn’s office taps into their global attraction with a pop of color, and a hand-painted de Gournay wallpaper of Japanese pine trees defines the foyer. Japanese symbols of personal healing and resilience, like koi fish and lotus flowers, can also be seen throughout the home. “They represent the idea of overcoming,” Soojian explains.

Purpose, passion, and personalization are represented in the home, too, showcased in special spaces like John’s inspiration room—a favorite among all parties involved. “We call it the ‘blue room,’” Lynn says. “I love it because it holds all the things that have inspired and influenced my husband throughout his life.” 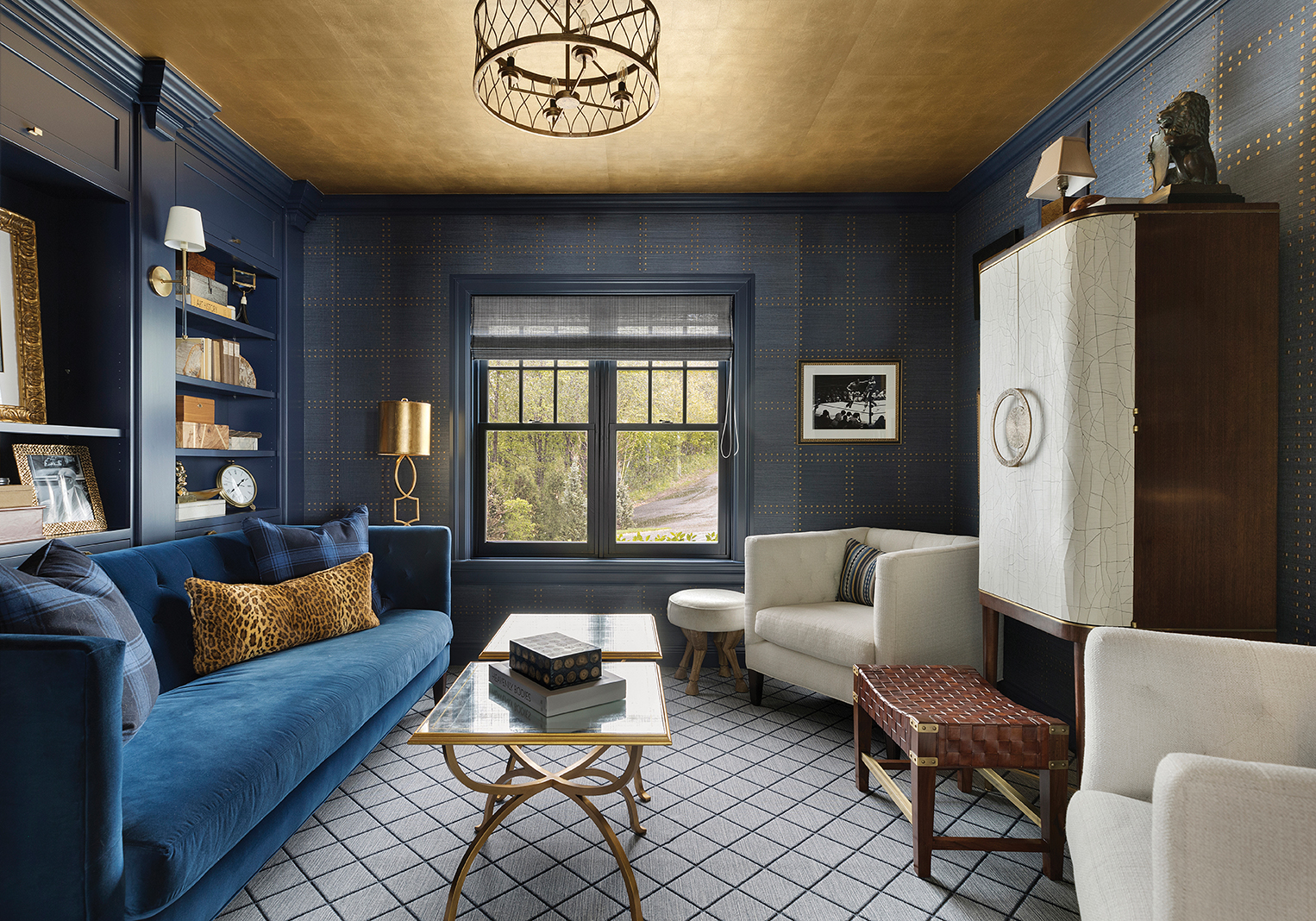 The room features an artisan bar cabinet, flanked by two chairs for cozy conversation, surrounded by bookcases that display John’s collection of photographs, books, and memorabilia of the great minds he admires. Aesthetically, the designers’ goal was to create a “jewel box effect,” accomplished with a monochromatic navy-blue color palette, gold grommets, gold-leaf wallpaper on the ceiling, and mirror-topped tables that reflect light and sparkle in the sun. Sparkle is also on display in Lynn’s boutique dressing room, another personalized space that houses her couture collection of handbags, shoes, and accessories. Its colorful wallpaper depicts Khulu vases embellished with African flora, a zebra-patterned carpet adds a touch of safari, and a tufted velvet settee grounds the dream-come-true space that drips luxury.

And although many more spaces in this home warrant coverage, one of the most noteworthy is the kitchen. Its list of impressive amenities includes two food prep areas; a restaurant-style banquette that seats up to 10; a butcher-block island; compost, coffee and smoothie stations; storage solutions; and of course, plenty of space for large groups to enjoy each other’s company—quickly proven on that sunny summer day when the O’Neils, Lynn’s parents, and their dear friends and family decided for themselves, that yes, this new house most definitely feels like home. 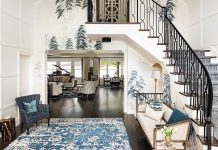